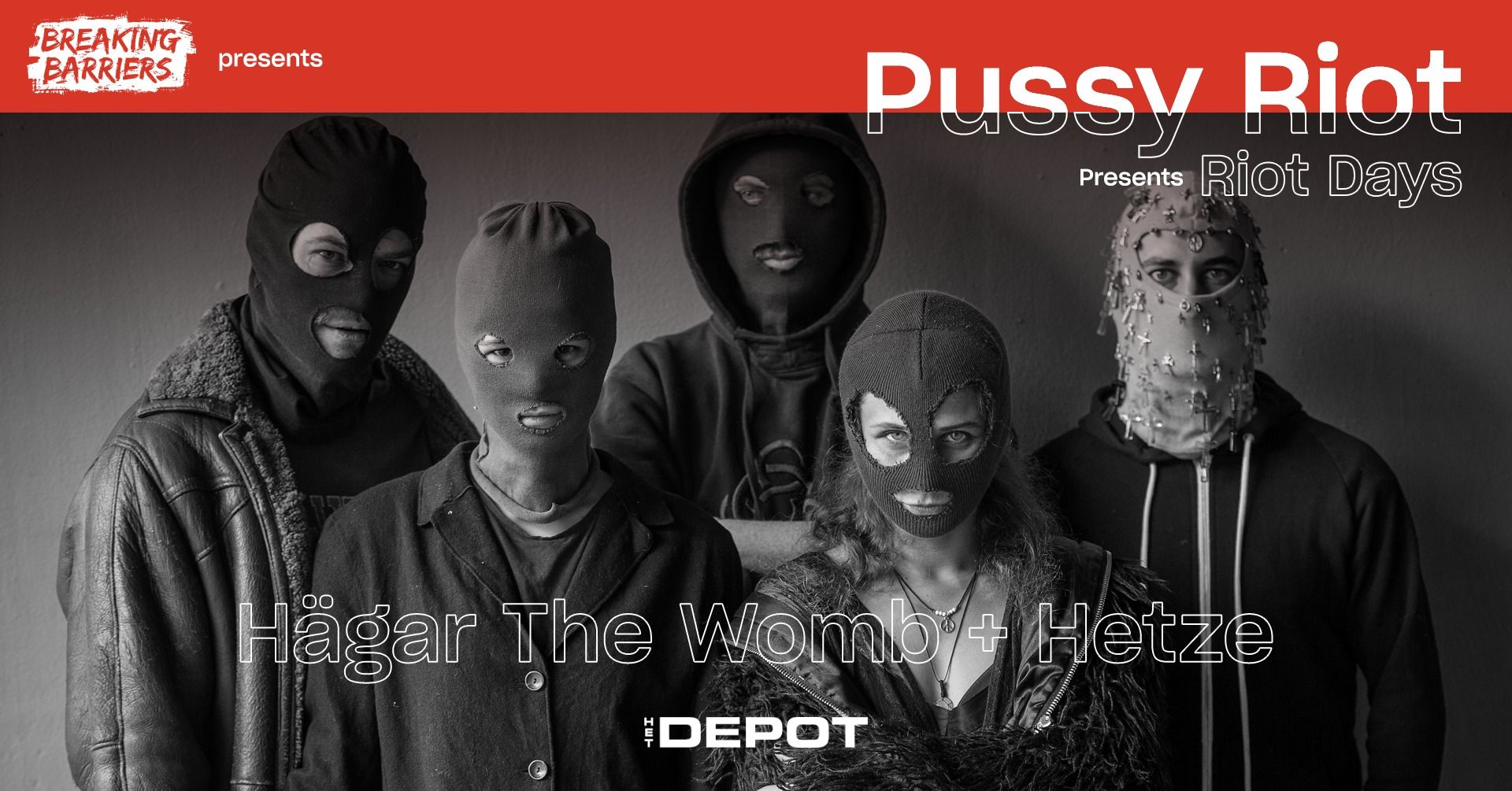 Unfortunately, everyone only understood what Putin is like when he started a war in Ukraine.

Pussy Riot is making the headlines again. Maria Alyochina - one of the members of Pussy Riot who was sentenced to two years in a labor camp in 2012 after a subversive performance at the Cathedral of Christ the Savior in Moscow - has fled Russia secretly with her friend. This also means that she can participate in the current tour, which will come to Leuven on May 20 as part of the punk festival Breaking Barriers.

Maria 'Masha' Alyochina currently resides at a secret address in the east of the EU, about which next to nothing is known. The interview is interrupted twice because the police come by, but they are not there for her. One thing is for sure: she does not lead an everyday life at all.

You managed to leave Russia after all. Was it difficult? 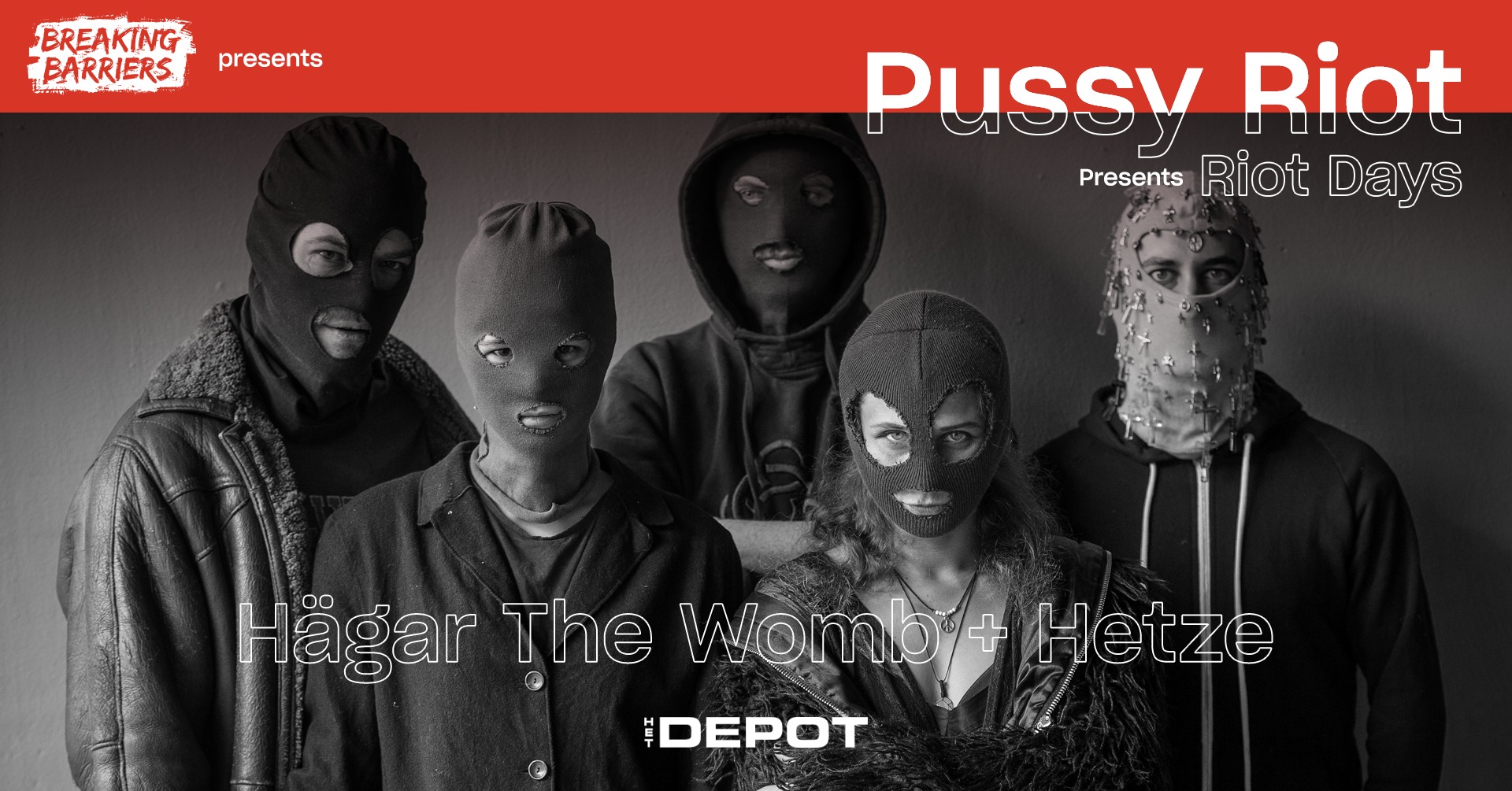 I do not have permission to leave Russia and I do not have an international travel pass, but it is important that I have found a legal way. During the last week of April I tried three times to cross the border into Belarus and the third time was finally successful. The second time it went fine but the answer was no. The first time was terrible. The KGB in Belarus was really terrible. I am happy to be in the EU, because now I can rehearse. We are not only preparing the concerts, but also a statement I want to make towards the audience.

Are you looking forward to touring again? What do you hope to get out of this? Do you think you will get a lot of support thanks to those concerts?

I spent two years in prison for the song ‘Punk Prayer: Mother of God Drive Putin Away’ [sometimes translated as ‘Mother Mary, ban Putin’] and now, in 2022, I want this song to be sung as loud as possible. It's not just about us now, it's about the whole world. Clearly a fascist maniac and dictator has his finger on the nuclear button. I live in Russia and I protested there for ten years. My first performance, for which I was sentenced to two years in prison, was at the Cathedral of Christ the Savior in Moscow. After that we took many more actions and I spent weeks and months under all kinds of arrests and in all kinds of prisons. I'm a bit of a pro when it comes to prisons. I want people to know how things are in Russia. We already knew in 2014 that a war was coming and we wanted to make people in Europe aware of this too. Unfortunately, everyone only understood what Putin is like when he started a war in Ukraine. Ukraine is now paying full price for this belated insight. With this tour we also want to support the Ukrainian refugees and Ukraine as much as possible. 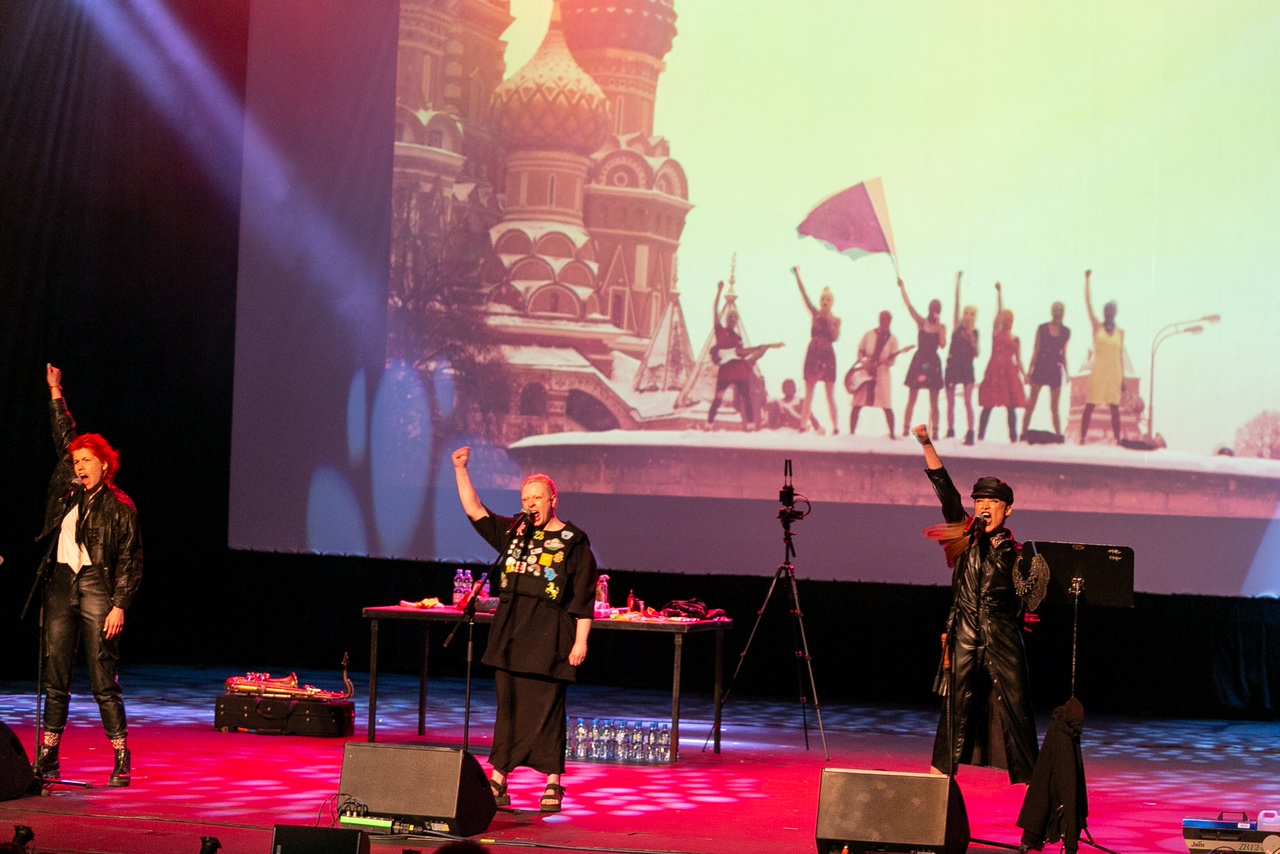 There are many Ukrainian refugees in Belgium and the population is being asked to help them. There are a lot of initiatives, but what the whole EU is asking is how we can do something against Putin. Many people feel powerless. What do you think we should do?

No one needs to feel powerless. You have power. Putin and his entire SFB/KGB/Cheka system are spreading hatred and displaying their weapons and their tanks everywhere. They just want people to talk about that. It shouldn't be like that. The basis of European civilization and the EU is the right to live for every person. There is nothing more important than human life. The total opposite of this European civilization is the way Putin and his post-USSR regime treat people. They don't care about people's lives.

Maybe they care about their own lives...

Yes, and that is also why life in Russia now is not just terrible, but three times worse than terrible. The reason is that the regime believes that all people should commit themselves to maintaining the regime. I've had to live in these conditions for 33 years and I know what it's like. Things got worse after the invasion of Ukraine, of course. Journalists and politicians are oppressed. Human rights are suppressed. Only in the deepest clandestinity can someone find something else.

Are there still independent media in Russia? In any case, those media do not reach us.

It's not about real media, but about channels on Telegram, which we can reach with the help of a virtual private network (VPN). Facebook and Instagram are not suitable for protesting the war. One even risks being sentenced to fifteen years in prison if one dares to call it a war. 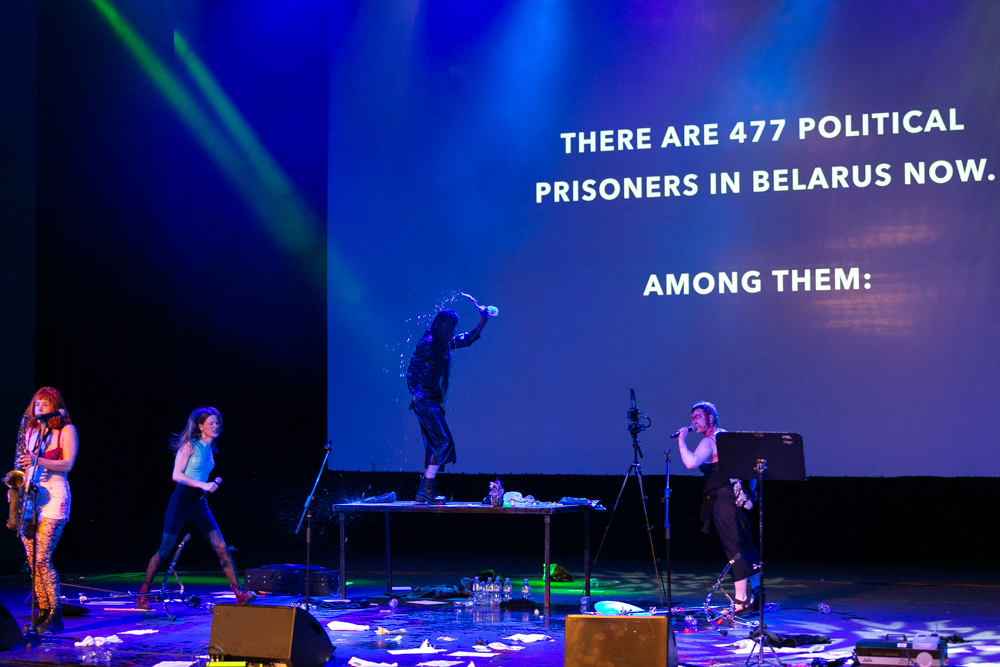 A few days ago the Western media reported that Putin himself now calls it a war. Before that, it was a ‘special military operation’. Can people still go to jail in Russia for calling it a war, even now that Putin is doing it himself?

Putin can do whatever he wants. By law it is a special operation and not a war. In any case, Putin will not be sent to prison for using certain words.

It seems that many Russians follow Putin because they only get to see his view of things. Is this true or are many Russians just scared? Do many Russians support the regime and believe all the lies?

That's strange, because Putin claims that the Ukrainians are all fascists and Nazis. Officially, he's just started this war to wipe them out.

According to a decision of the Russian court, a poster with the caption ‘We are against war’ discredits the Russian army. It's not strange. It's a pure dystopia. You are still a long way from that, but it can happen anywhere. Depriving people of freedom of information in your countries will result in present-day Russia for you too. We are all human. We are not reptiles. It's all about people. With the war raging now, there is of course even more propaganda and censorship, just like in the Third Reich. 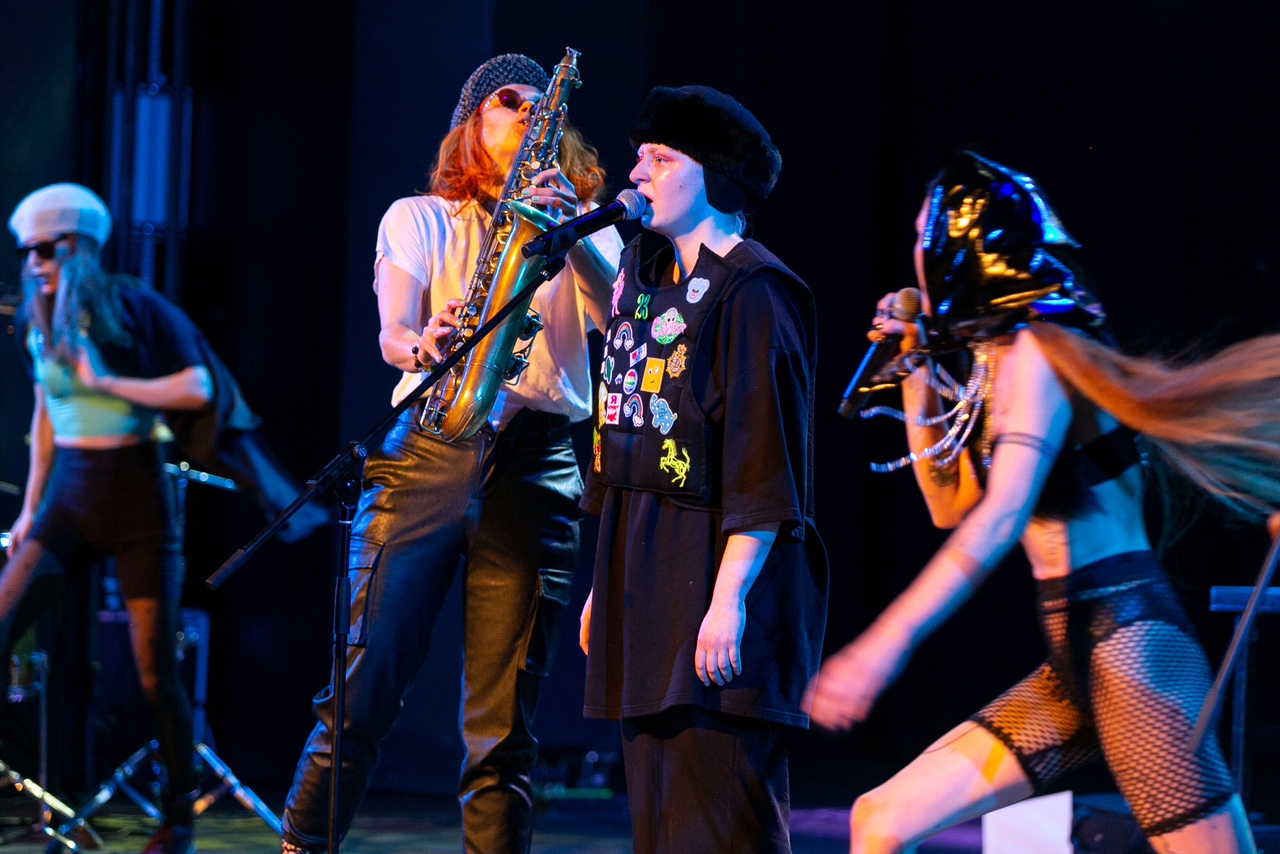 Are both regimes similar?

Definitely. In the West, people probably hear that 80 percent of the Russian population supports Putin, but that is nonsense, because no one dares to give his honest opinion openly. You could end up in jail for that. The Russians are only human too and we are not at the point where everyone is saying they are willing to go to jail for ten years. The people who do are real heroes. We will certainly talk about them during our concerts. It is also our role to mention these people, because in the West one hears almost exclusively about Alexei Navalny.

The VRT – the Flemish public television – recently showed a documentary about women in the opposition who are doing their best, but most of them have fled Russia in the meantime. I had the impression that you would never flee from Russia because it is your home.

I am currently in the EU on tour. I should really be in jail. In 2021 I was in prison six times and then we don't count the house arrest. I've found an opportunity to go on tour now and stay out of jail.

Do you think it will be safe? Are you not afraid that they will come looking for you? We've heard a lot in recent years about Russian refugees who were subsequently poisoned by Russian secret agents. Aren't you concerned about this?

This is not the time to be afraid. Just look at Ukraine, where people behave heroically. If they are not afraid, how can I be? The aim of this tour is, of course, to draw attention to the political prisoners. We want to show the people in the West that there are other people in Russia, with a different outlook on life and a different background. They are now in prison. 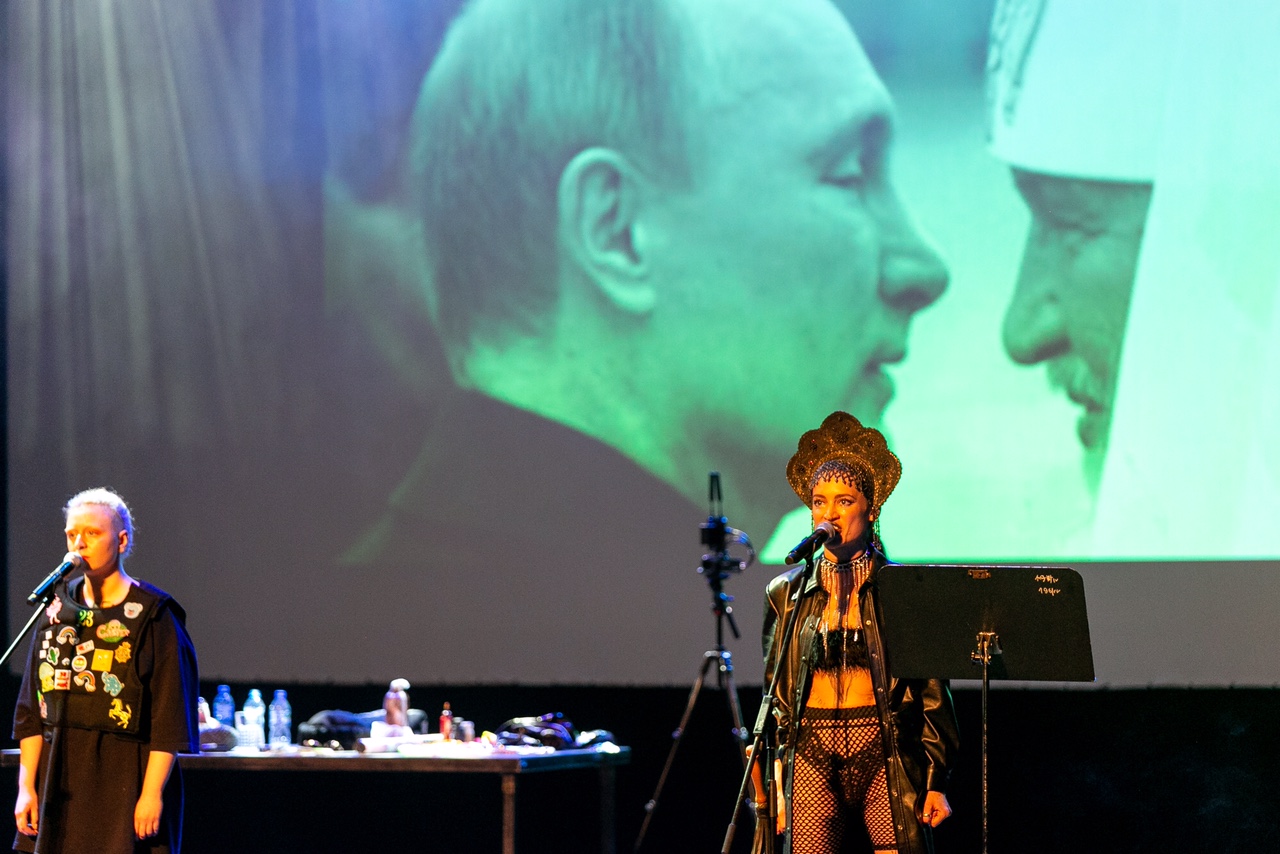 Oh, but we have a lot of prisons, you know. Russia, as in the past, is a big prison.

How many prisons are there really?

I can't count them anymore, but actually they aren't prisons. They are work camps. It is legal slavery. The inmates have to sew and stitch uniforms for the police twelve hours a day. They are paid 3 euros per month for this. It's real slavery. This system has been around for twenty years. We've talked about this before and I think it makes sense to talk about it again. I also want to speak with politicians in the West. I'm an insider who knows what's going on. They do not have a clear picture of what is happening in Russia.

One of the reasons we don't have a clear picture is that European journalists don't find a way to find out what's actually happening? Is there a way for them to gather accurate information?

There is no legal way, but there are a number of channels on Telegram. We know what Lukashenko has done with Belarus. Well, Russia is moving in that direction very quickly. Belarus really is hell, but nobody cares about that. It's like North Korea, but in the middle of Europe. 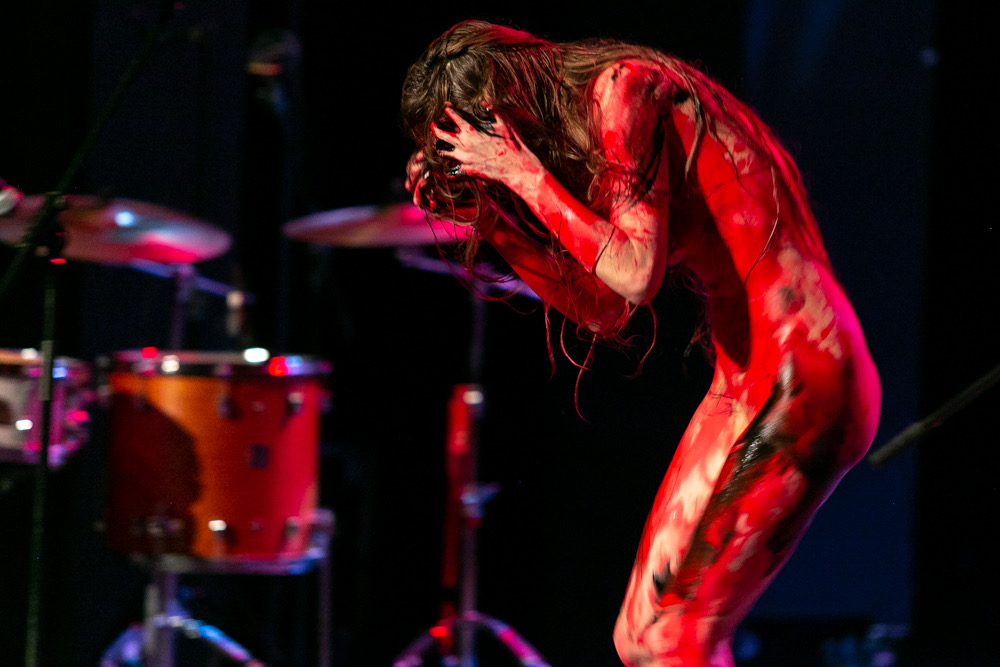 We care about that situation, but we don't really know what to do about it. Putin still has nuclear weapons and he also controls the gas supply. Gas prices are skyrocketing. The EU would like to ban Russian gas, but has nothing to replace that Russian supply with. Putin could shut down the gas pipelines at any time and European leaders are also concerned about nuclear war. What do you think about this?

If everyone stays scared, the price will always get higher and higher. If the current sanctions had already been taken in January this year, there would be less blood spilled now. It was late then too, but now it's all worse and it could get a lot worse. As for potential sanctions, Navalny's team has drawn up a list of 6,000 names. Navalny has an incredible team fighting corruption like real lions. The EU should use this list.

The bank accounts of many wealthy Russians have already been blocked. They can no longer travel.

Now there are about twenty oligarchs, but there are 6,000 names on the list. That list is really worth it.

Are there any Russians who support Putin and, if so, why are they doing so?

You have seen Donald Trump and his supporters. More or less the same is happening in Russia, but with new imperialist ambitions. The propaganda is doing its job. Officially we are fighting the fascists. They use an old template for this and refer to the victory in the Second World War. We are told 24 hours a day that we are fighting for the cause and against the Nazis. We must not forget that Stalin is Putin's role model. He does not compare himself to Lenin, Brezhnev or Khrushchev. He follows the Stalinist model.

On Friday 20 May 2022, Pussy Riot will perform 'Pussy Riot presents: Riot Days' in music center Het Depot in Leuven, a musical and theatrical journey through their arrests, show trials and prison sentences, supplemented with poignant comments on the current situation in a prison of more than 17 million square kilometers.