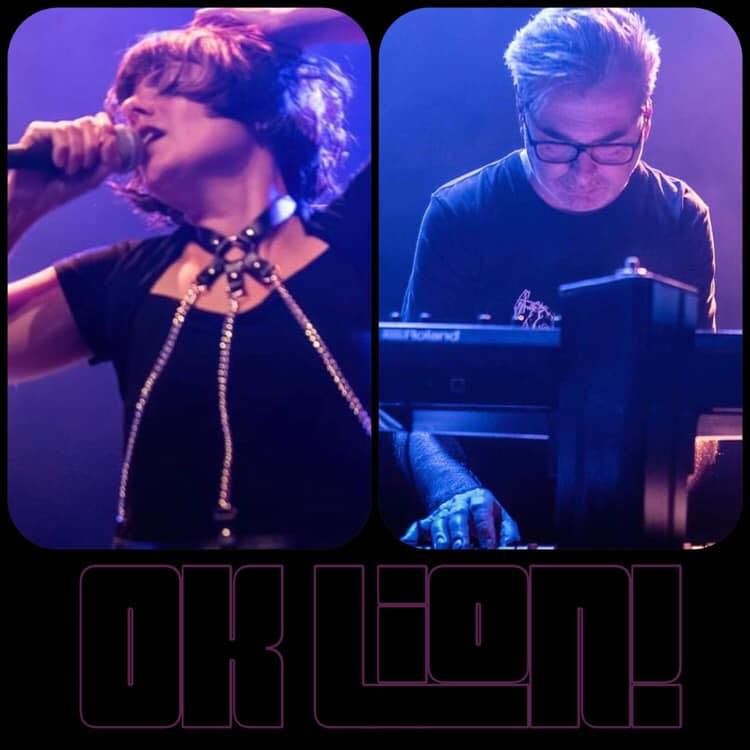 I didn't convince Patrick Codenys to work with us, it was his idea!

On our previous Dark Entries Night, you could discover OK Lion. This fresh Brussels electro duo released its debut '120 Ways To Get Away' at the beginning of 2022, and it contained contributions by a man called Patrick Codenys, famous for his work with Front 242. So we had a lot of questions, which we were happy to ask Stéphane Devillers (synths) and Janaina Costa (vocals).

Hello Stéphane and Janaina. If I understood correctly, you met at the beginning of 2020. I even read that you immediately composed a song the day you met. How did it all go?

Stéphane: Indeed! A mutual friend named Boods put us in touch. I then sent my demos to Janaina, who came to my house two days later. During this first meeting, we wrote the lyrics to ‘Play’ in one evening and we immediately recorded a first version of this title!

Janaina: That was crazy! I had never sung solo before, and I had no idea how to do it, but as soon as I heard the first notes of ‘Play’, I immediately had a vocal melody in my head and we continued on this intuition. We still work like that today: if the melody comes to me on the first listen, then it's a good sign. The lyrics follow, at their own pace, afterwards.

The meeting took place just before the lockdown. There are several ways musicians have reacted to the lockdown. Some complained that they could no longer give concerts, but others used the confinement as a creative period where they could work in complete freedom. How did you experience the lockdown?

Stéphane: The question of concerts did not arise because we had no songs at the start and we were not ready. We wanted to record a full album, which we were able to do in six months thanks to the lockdown. We weren't supposed to see each other but we broke the rules and worked once or twice a week.

Janaina: We made a creative ‘bubble’! It was a way of escaping during this period of withdrawal.

The disc '120 Ways To Get Away' was released in March 2022, two years after you met. How did the recording go?

Stéphane: Very well. Some instrumentals had already been recorded for a long time since I had been looking for a singer for some time. I continued to compose and Jana wrote the lyrics and recorded the vocals, piece by piece. After six months, we had thirteen tracks. Enough to be able to put the album on Bandcamp and streaming platforms.

What impressed a lot of people was that you worked with Patrick Codenys of Front 242, who mixed and produced two tracks on the album. How did you convince Patrick to work with you?

Stéphane: I didn't convince him, it was his idea! I have known Patrick for twenty years and he regularly asked me about my project. I sent him the demos and he offered to mix three tracks. In the end, we kept ‘Get Away’, which is our third single, and ‘Brisure’. He did a fantastic job. We are very proud that Patrick participated in the album, Front 242 being one of my major influences.

Janaina: I still can't believe how lucky we were!

With the participation of Patrick Codenys, aren't you afraid that everyone will compare you to Front 242? Your music is very different, isn’t it?

Stéphane: As you say, our music is different. Front 242 is EBM. On our side, we are a mix of electro-pop and a little rock. But I think you can hear their influence in our music, even if we cannot compare.

Janaina: Patrick's participation was an invaluable gift! But indeed, even if we hear the influences, we are very different, much more pop-rock, especially on stage with drums and guitar.

You started OK Lion as a duo, but there are four of you on stage now, after the addition of Pierre Bertens on drums and Jeff Bachely on guitar. How did it go, and what is the role of these two musicians within the group?

Stéphane: When the album was recorded, we started rehearsals in order to play live. We wanted to add a drummer and a guitarist to make the live more dynamic. A friend suggested Pierre to me, who accepted immediately. He did not participate in the creation process because he has his own group: Autoreivs. Jeff, meanwhile, arrived later. He comes from the metal scene!

Janaina: The first year we composed the album, and we looked for ways to make it visible. So we started working on the clips and rehearsing in order to perform on stage. When we started collaborating with Pierre, we had already contacted Jeff but he was not available. It was during the filming of the clip 'Get away', in which he participated, that this idea came back ... a big week before our first concert tour! Jeff learned the songs in record time and we had a wonderful show! Today, they are part of the creative process in their own right, especially for the live part: we first compose together and we put guitar and drum samples, they appropriate them and offer variations. We then decide at four of what is retained. The musical collaboration is very fluid between us, it's really nice!

You shot some videos for three tracks on the album. You worked with film editor Zvonock. Are you happy with the result?

Janaina: We were so lucky to work with Zvonock! He is very involved in the visual identity and likes our music very much, which makes working with him fluid. He is open to proposals and the rendering is at times hilarious, but yes, we are happy. Recently he filmed one of our concerts and made a clip and a teaser of it. The result is really great. He has a very particular and identifiable way of filming.

Among the characters that we find in your videos, there is the baby doll. I noticed that the doll even accompanies you on stage. Can you tell me how the doll entered your universe, and what importance it has for you?

Janaina: So that's more of a coincidence… During the filming of our second clip, ‘Crash’, we wrote a series of cross stories that took place during a flight. Each character had a role, and among those was a dad with a baby. As the baby was plastic, we invented a story between us that the dad had a special connection with this toy, in a somewhat surreal way that no one questioned. When we shot the third clip, ‘Get away’, we made several connections with the first two: we took the same car as in ‘Play’, there was again a body in the trunk, we resumed the exchange of smiles between the hostess and two other ‘Crash’ characters, and there's the baby gliding in both clips. It was a crazy idea that came up during filming. And then we took the baby on stage to continue this delirium. The clips are shot exclusively with the help of our friends, the atmosphere during filming is often crazy. Professional but quirky. The baby character amused us and now it has become our mascot. It is placed sometimes in front, sometimes on the drums, sometimes attached to my microphone…

What plans do you still have for the future?

Stéphane: We are recording a second album. We hope to be able to release an EP already in the spring. We will probably be working on new videos, and we hope to do as many shows as possible. We just played with Underviewer and ELM at Magasin 4 in Brussels and it was a fantastic gig!

Janaina: We also want to explore new collaborations, but that's still in the draft stage... to be continued!